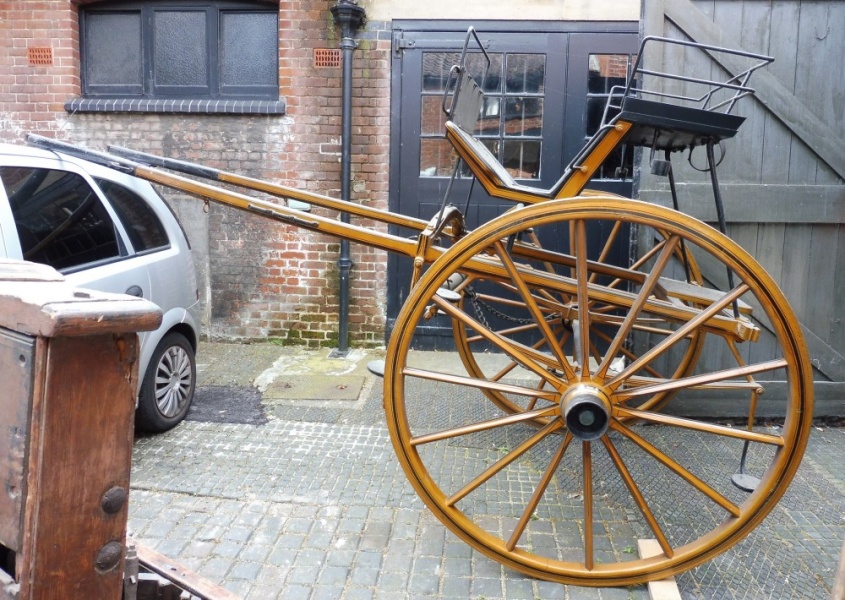 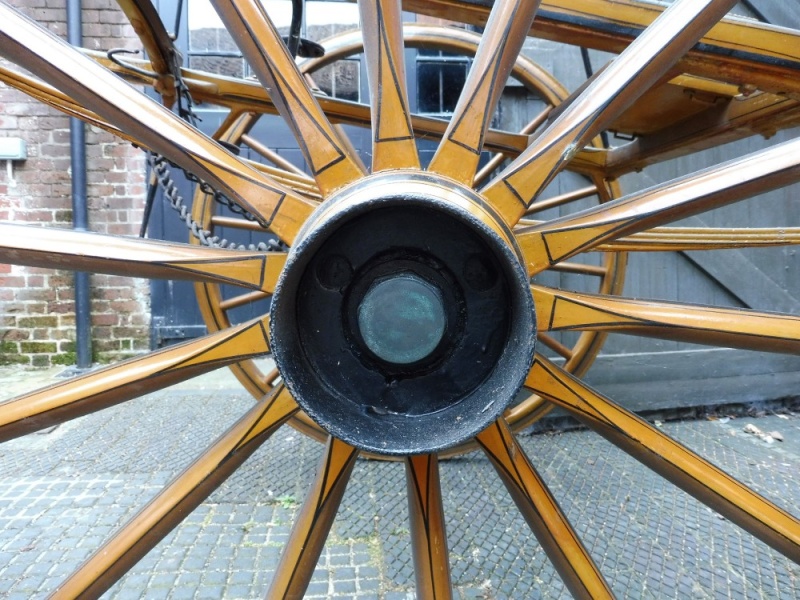 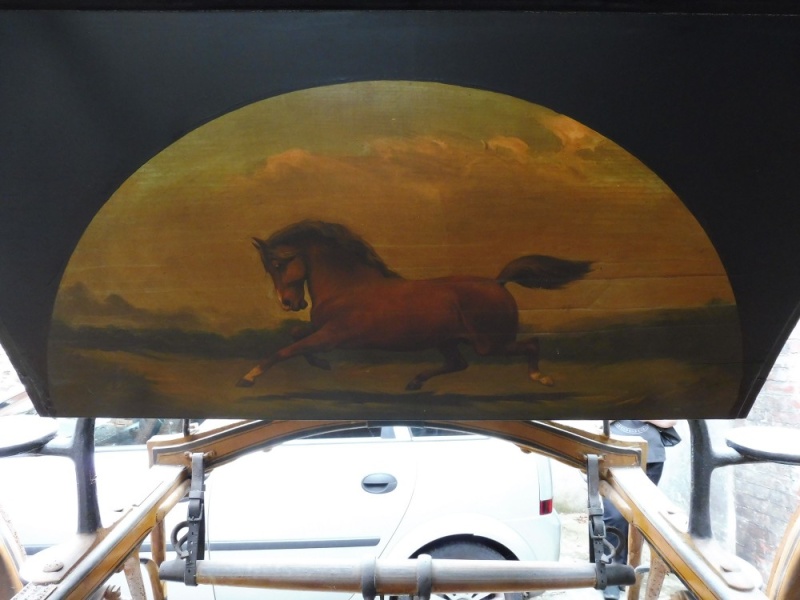 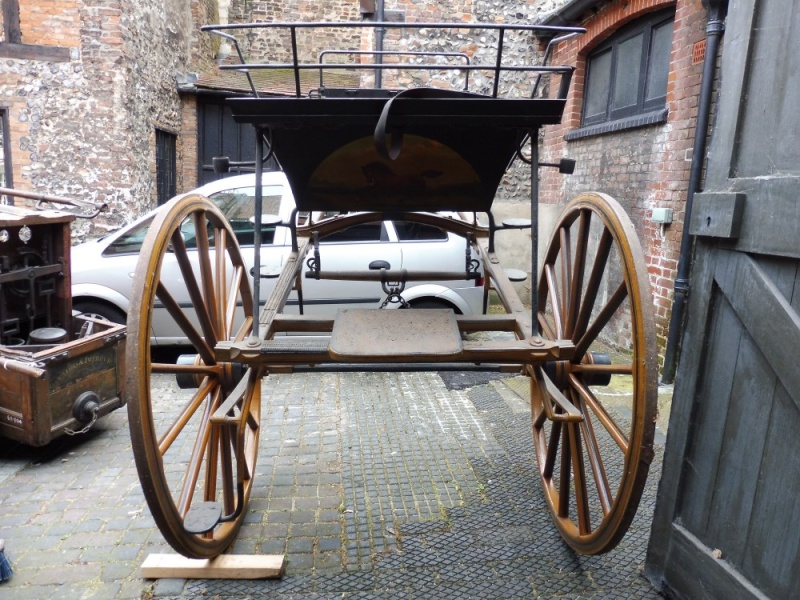 Use the dots above to scroll through images.

This is a very rare and exciting carriage. It would have been owned and driven by a gentleman who wanted to be noticed when out and about and driven to an eye catching single horse or a tandem of horses. It is a sporty carriage.

An unusual feature to this gig is the painting of a trotting horse on the back of the foot well panel indicating that this was a bespoke build.  Many carriages have painted panels but they are usually found on much larger coaches or continental vehicles and would normally depict mythological or pastoral scenes. This is certainly the only example of a privately driven gig having such decoration in the UK.

A painting by Francis Sartorius entitled 'Lord Lonsdale's Favourite Gig', painted in 1795 illustrates a similar skeleton gig. James Pollard painted a scene, after John Nost Sartorius of 'The Maid of the Mill' a horse who trotted 28 miles in two hours across Sunbury Common in 1824. This horse is also depicted harnessed to a Skeleton Gig.

A very light weight carriage with the seat supported on iron braces attached to the shafts that run the length of the vehicle. The seat has iron rails and there are grab handles on the dash board and the back panel of the foot well. Between the shafts at the back are two bars on which is a groom’s seat/board that is mounted via a single step. The dashboard looks to be a later addition, it seems too heavy for this gig and has a very high rein rail.

The shafts are straight and have three iron breeching D’s attached with four screws on the side edge where one would expect breeching D’s to be. On each shaft, half way along the on the underside, is a loose iron ring and its fitting. The iron tug stops are also positioned where one would expect them. At each end the shafts have an iron fitting that curves around the tip. On the upper side of the near side shaft an iron jagged plate is attached signifying that this carriage was predominantly mounted from the nearside. There is no evidence of there having been a similar plate on the off side.

Between the shafts is a splinter bar that is curved (known as compassed) in shape, upwards. From this a swingletree is supported, held in place by two leather straps and attached to the underside of the springs next to where the springs are attached to the axle by two iron chains. The swingletree is actually a main bar from a set of team bars belonging to a coach, it has clearly been adapted and added to this gig at a later date. The footboard is supported by two iron supports that are bolted to the splinter bar.

To mount the carriage at the front (both sides) there is an iron step attached to the splinter bar. It hangs low and straight spliting halfway up to form a support for a second step. The treads are circular and plain. Between the shaft and the seat on both sides is a single step situated halfway up its supporting bar also with a circular plain tread. At the back is a single step attached to the underside of the rear bar running between the shafts and to the spring, this step has an oval shaped tread. Lamp brackets are fixed to the underside of the seat, there are no lamps. All of the external furniture is iron and painted black.

This Skeleton Gig has 14 spoke English pattern wheels with flat iron tyres on mail axles. The Mail axles hint to this carriage being of an early date, 1790-1810. It was more common to find collinge axles (patented in 1792) on a carriage of this type. The gig is sprung on side springs.

The paintwork appears to be original and is in yellow with black lining. A later varnish has been applied which has discoloured giving the carriage a much darker appearance. Chips to the varnish show a beautiful pale lemon yellow, and eye catching and popular colour for carriages in the early part of the 19th century. On the back of the footwell panel is a painting of a horse trotting along with a backdrop of a landscape painted in a naïve style.

There are no surviving cushions or upholstery.

On the back of the footwell panel is a painting of a trotting horse. The horse moves from right to left and is in front of a landscape. It is bay in colour with white socks on the near side front and back legs and a white snip on the nose. The painting is in a semi circular shape and in a naïve style.

This gig is in good, original condition. The wood elements are sound and it retains all of the iron work. The leather work and soft upholstery has been lost. The paintwork is original with a  later varnish. No signs of recent worm damage and no signs of mould.

This Skeleton Gig is currently in the care of Norfolk Museum Service.